You asked about â€¦ me

I’ve had conversations with some of you that lead me to believe that even more of you just might be interested in hearing about me and why I’m writing Simple Scrapper. I hope I’m right, otherwise most will just “Mark as Read” and move on!

My in-real-life name is Jennifer Wilson, but I use “starxlr8” for most of my online profiles. I’ve had that handle/online persona since logging in to AOL for the first time in 1996. I think its one of the only things that has stayed the same in my life since then! 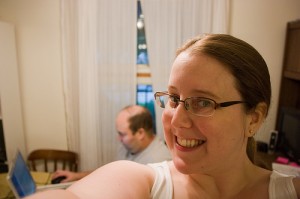 Above is a picture of me in my natural state. I’m just a regular girl like you! On most evenings, you can find me in my pajamas working on my blogs or scrapping… with my husband working as well on his own laptop. Sometimes we drop everything to watch a movie or head out to our campsite to fish.

I’ve moved more times than I can count in the past 11 years, but am now finally settled down with a great husband, 2 stepkids and 2 pets in the midwest. I’ve seen more corn and beans than I ever thought I would, and I find the wide open prairie simply beautiful.

Many will be (and have been) surprised to find out that I’m 29 (and then say I definitely cannot complain about feeling old). I think I’ve always had a more mature sensibility, though perhaps my mom would partly disagree. My husband did say “you’re such an old lady” the other day when I watched four episodes of The Golden Girls in a row. (C’mon, you can’t argue with great comedy!) Pretty much since leaving my parents home in 1998, I’ve longed to feel settled and grown up. While my friends were out partying the night away, I was scheming how to declutter my hot spots with FlyLady. Even as a child, I would go to my friends’ houses and clean their rooms!

This is not to say that I’m some Martha-esque beacon of perfection when it comes to organization, simplicity and productivity. I struggle with these things as well, probably just as much as you do. That’s actually why I started writing here at Simple Scrapper.

When I discovered this hobby, I quickly realized I knew next-to-nothing. I searched cyberspace near and far, but became overwhelmed with scattered, incomplete and sometimes, unattractive sources of inspiration and information. I knew there had to be a better way to learn about digital scrapbooking, a way that would fit into a modern woman’s life and appeal to her 21st century tastes for quick-access and cleanly-designed information.

I knew that if I was struggling to bring simplicity to my creativity life and find balance with my work and family time, that others likely did too. That if it was hard for me to figure out “the best” or even “the good enough” system to organize a growing digiscrap collection, that it was probably just as challenging for other women (and men) like me.

I’ve never claimed to be a hot-shot expert on everything, but I am pretty handy at pinning down those who are. I try to find the best information out there and add to it. When I write a Simple Scrapper post, sometimes I’m teaching myself as I go along. When I put together a list of tips, I cull to what makes sense and what is actionable. I want you to leave Simple Scrapper every day feeling like you have deepened your knowledge, discovered creative ideas, found a great new way to do something or felt motivated to bring more simplicity into your life.

We’re on this journey together and I can’t wait to build the future of Simple Scrapper with you.