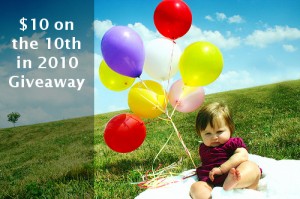 It’s here again! Are you ready for your chance to win a $10 gift certificate to the digital shop of your choice? This is the easiest giveaway ever.

What is your best tip for managing digital photos?

Simply answer the question in the comments by 9am central time on Thursday, February 11, 2010 Friday, February 12, 2010 and you’ll be entered to win.