How I learned to shoot in manual mode 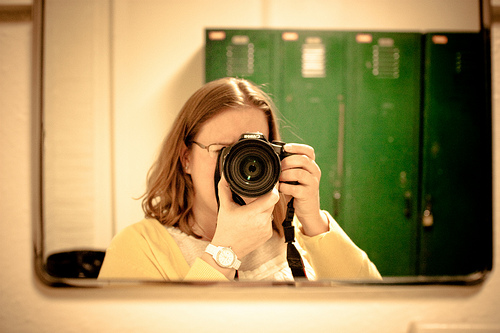 They say you don’t just wake up one day knowing how to use a camera, but that’s kind of how it feels like it happened for me. I didn’t… and then I did.

I remember being 12 or so and discovering my dad’s old camera. It had all these dials and buttons, not just an on or an off button. I had no idea how to use it, but I somehow sensed the power of what could be. I carefully tucked this gem back into its case, but carried the wonder of possibility with me.

In 2003, I purchased a FujiFilm S5000 because it was a mid-range consumer model with the ability to attach different lenses and go fully manual. Fast forward to 2008 and I was still snapping pics on auto. I thought “aperture” was only a fun name for a brand of Mac-compatible software.

It was at the end of 2008, after getting married and joining my husband’s large family that I suddenly had more to take photos of than my cat and my feet. I knew it was time to get serious. This is the story of how I went from clenching tight to my auto button like a security blanket to flying free as a bird on manual.

Step 1: The one where I learned which buttons did what. The first thing I did was find the instruction manual for my camera. I downloaded it from Fuji’s site and read it cover-to-cover, twice. Even though I didn’t know what half of the words meant or why I’d actually want to use most of them, I had a good sense of my options.

Step 2: The one where I learned what that actually meant. I was determined to learn the terminology and figure out how to use every last feature of my then 6 year old camera. Manual is manual, even at 3 megapixels. I read Digital Photography School and other blogs voraciously, even documenting some of my learning here at Simple Scrapper.

Step 3: The one where I was effectively in Mexico. Having 5 years of Spanish under my belt, I can understand a good deal of the spoken language, but “lo siento, no habla espaÃ±ol”. At this point in my journey I knew, on paper, what all the terms meant. I had the comprehension, but not the capability to speak the language.

Step 4: The one where I started to get it. Despite my frustrations, I felt like I had earned my baby wings enough to graduate to a new camera. Not long after my upgrade, I took a class with Jenn & Stan at Scrapper’s Workshop. My baseline knowledge was definitely taken to the next level in this course.

However, my biggest breakthrough came when Stan pointed out the exposure indicator on the screen and in the view finder. Finally, I had an answer to my biggest question: How do you “know” (or even begin to learn) what settings to use?

Step 5: The one where I got fed up. After a holiday season full of missed shots, I was really frustrated. I was using primary aperture-priority mode at this point as I learned to control the depth of field. While I knew I was doing some things right, my photos weren’t coming together for me. My photos were too noisy and out of focus. I questioned whether I had handled my lens too roughly. I stepped away for a little while.

Step 6: The one where I got brave(r). Determined to not be defeated by an inanimate object, I got back in the saddle. That’s when I joined Clickin’ Moms (affiliate link). I devoured the beginner section in one day and realized another huge breakthrough. I learned all the things I was doing wrong that gave me out of focus images time and again. It was totally me and not the lens, but now I knew.

Step 7: The one where I jumped off the bridge. It was last week during Week in the Life when I realized I was shooting in manual and I wasn’t scared. I had a huge “wait, when did this happen?” moment and then decided to just go skinny dipping. I turned my focus to manual as well, committing to serious practice and accepting that imperfect shots were a given.

While my default may now be M on the dial, I’m not claiming to be any good. I’m increasingly nimble at making on-the-fly adjustments, but by no means slick. My photos are passable and look much better with post-processing, but I am there and ready to celebrate.

Along the way with each of these steps came lots of practice and more practice is in my future. Learning about photography, like most skills, is an ongoing process. Thanks for reading my story.

Where are you in your photography journey?