Q & A about #scrapchat

Thanks to everyone who entered the $10 on the 10th giveaway by commenting on the #scrapchat post. The winner is Jennifer Evangelista, who wrote:

Fun! I donâ€™t twitter much, but I love to chat. And I already see several â€œfamiliar facesâ€. Looking forward to it. Thanks for setting it up.

I’m not planning to talk about #scrapchat and Twitter all the time, but I do want to take a moment to answer some of the common questions I’ve received. We’ll also spend the first few minutes of the chat tonight in a Twitter bootcamp, making sure everyone knows how to participate. #scrapchat is welcoming to everyone!

I don’t really “get” Twitter, isn’t it just status updates?
Yes, Twitter allows you to post brief (140 character) updates about anything, but its more than that. Twitter is a different kind of way to have a conversation, to be part of a group, to participate and engage. I know that sounds fluffy and abstract, but its true. You can learn, discussion, promote, share, inspire and be inspired.

I don’t have many followers, how will anyone see what I tweet?
The awesomeness of a Twitter party is that you don’t have to be following someone to see what they tweet in a Twitter party. By seeking out the #scrapchat hashtag (via the methods below), you can see anyone who is participating. (I do recommend following each other, though!)

How do I find the #scrapchat if its not in a chat room?
There are a variety of ways to monitor or participate in the hashtag chat:

Here’s a helpful diagram of the TweetChat chat room: 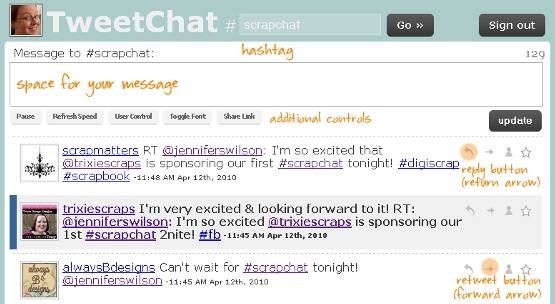 Is there more I need to know?
My best advice is to try it out and watch how others interact, but here are some general Twitter pointers:

If you have more questions, just ask them here! Also, if you’re totally stuck, but really want to participate, I’ll be in the Simple Scrapper chat room for 30 minutes prior to #scrapchat to provide one-on-one help.