Sometimes there are more stories in our photo sets, just waiting to be discovered and told.

Yesterday Aaron Morris blogged about the idea of reusing photos for more than one scrapbook page. By being a moment scrapper he says, he sometimes does feel comfortable using a photo more than once. His reader’s viewpoints were mixed on the topic.

I don’t frequently scrapbook the exact same photo, but I do often use many photos from the same set (i.e. generally, an event) to tell a variety of stories.

Last night I was editing a few additional photos from Christmas and a series of my daughter really captured my attention. There was a different story there that I wanted to tell.

My first thought, however, was how does this page fit within the family story I am telling? I already scrapped Christmas in my December Daily album. Do I need to do more or should I spend time on something else?

I realized that this story really had nothing to do with Christmas, despite it occurring on the 25th of December and being a part of our Christmas memories. It was more about my attempt to take photos of her and how she was completely distracted by the fabric and color of her dress. In hindsight, I could have taken the story even further to discuss her response to colors and discovery of different textures as she has grown.

This layout will live in my Things We Do album because it is family memory of the holiday season and not solely about my daughter. 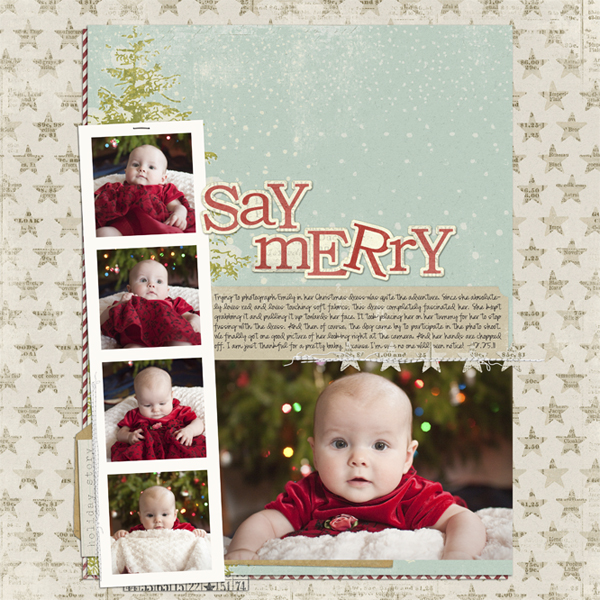 More Ideas for Finding the Other Story

So often we have many images from a given time period that a number of stories can be drawn from a single memory, event or photo set.

In the layout on the left, I describe how we waited out a snowstorm at my uncle’s house. On the right, I used an image of my husband from the very same visit to scrapbook about Valentine’s Day two months later.

In this example, I use one photo in a series to discuss how my husband and I had changed in our first year of marriage. In the other, to document how we always seem to post a certain way for photos together.

Try looking for photos that tell these ‘other’ stories when you want to go deeper into personality quirks, growth of a person, or specifics of a relationship. A photo is not the sum of a story, it is just the starting point.

Working with photographs in scrapbooking is like peeling an artichoke. On the surface you have specific (event) details, but as you tear away the layers you can uncover something far richer.

Credits: Say Merry, Layover, Better Half, Then and Now, Kiss