Scrapbooking your “Then and Now”

Most scrappers are familiar with the “Then and Now” theme and may have scrapped one or two layouts comparing and contrasting the past with the present. As I looked through my scrapbook layouts, I discovered that it’s a theme I’ve scrapped frequently over the past several years.

In part, that’s because I’m now an empty nester and have a bit more time to reflect on my sons’ childhood years. Additionally, I inherited my family’s photo collection a few years ago and have an abundance of heritage scrapbook material, rich with possible connections between “yesterday” and “today.”

The Simple Scrapper Premium Membership February collection included a “Then and Now” template that I used to compare my oldest son from the time when he began college to today, just a few months away from finishing college. For this layout, I wanted my son to be more or less the same proportion in the photos, so that it would be clear to the viewer what was being compared.

Physically, he’s not significantly different now than when he began college; the journaling addresses the changes in his maturity over the past several years. Lining the photos up within Photoshop was relatively easy. To create contrast between the two photos, I converted the photo from 2007 to black and white, so that the viewer’s eye was drawn towards the photo of my son in the present day. 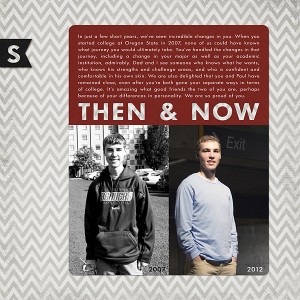 Approach #2: Focus on the Journey

This past spring, my youngest son graduated from high school. I wanted to capture the journey of raising my two sons by comparing a photo of the three of us from the time my youngest son was a baby to his graduation day. In this layout, I chose to emphasis the “then” and “now” by changing the photo sizes.

I did this because the photo from the earlier time wasn’t particularly great. It was a scanned snapshot in which we were not formally posed. A layout with equally-sized photographs would have drawn attention to the difference in the quality of the two photos, distracting the viewer from the connection I was trying to achieve. Because the present day photo was enlarged, I converted it to black and white so as not to overwhelm the smaller photo.

In a Blink by jeanmanis 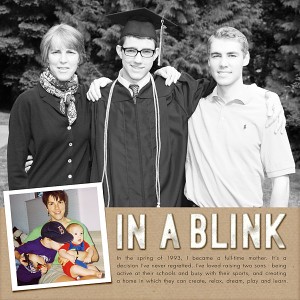 Approach #3: Focus on the Similarities

A couple of years ago, while organizing slides from my childhood, I discovered an image of me and my mother during a vacation trip. It reminded me of a photo taken of me with my sons during a vacation. While this layout doesn’t focus on the same person, or same exact set of people, it still draws the comparison between my mother and me at two different points in time when we were approximately the same age.

In this case, the chosen template strongly delineates the “then” photo from the “now” photo. I didn’t feel that additional emphasis was needed on either of the photos, so I left their color as is. In both cases the images were scanned. The older photo has vintage coloration. 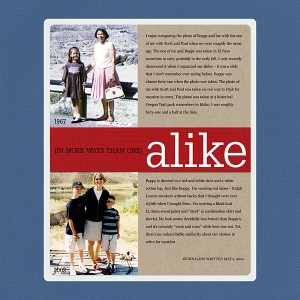 Tips for Scrapping the “Then and Now” Layout:

Template Kitty used for Jennifer Wilson’s layout then and now is available with a free Simple Scrapper site membership. 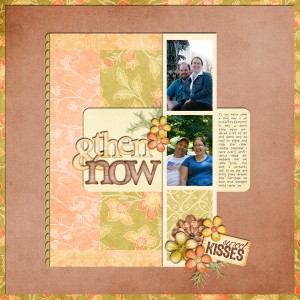 In 5 Steps to Photographing Your Child’s Growth, Katrina Kennedy provides excellent suggestions for capturing your child’s growth in photos, beneficial for future “then and now” layouts.

In this Memory Keeping Monday video, Shannon Tidwell, Garden Girl at twopeasinabucket.com, shares her process for creating a “Then & Now” layout.

pink robe then and now by jesshunt 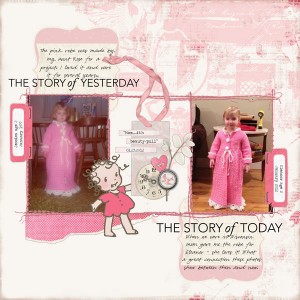 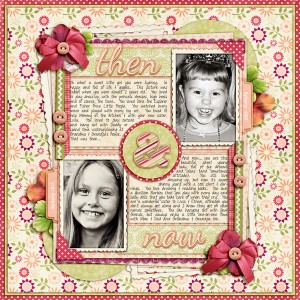 then and now by Kelleanne 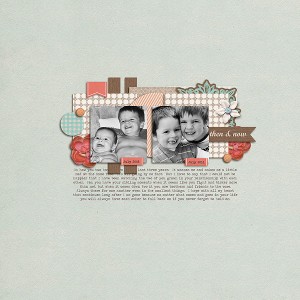 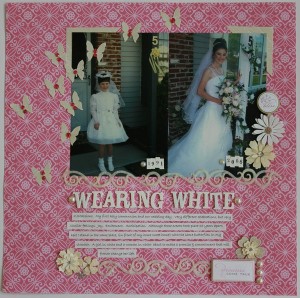 Then Now by Marcy Penner 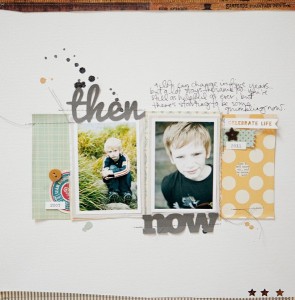 Then & Now by Kelly Goree 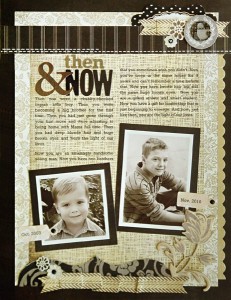 Have you scrapbooked a “Then and Now” layout? What stories were you comparing?