Telling the Story with the Single-Photo Layout

I find myself scrapbooking with just one photo for many of the same reasons as Jean. Most often, I want the story to be the star and the photo to simply be a launch point into that deeper meaning. – Jennifer

When I began scrapping in the mid-2000s, I scrapped with paper and created mostly two-page layouts. I was under the impression that scrapping meant crafting-themed, multi-photo layouts about big events such as a wedding, a holiday, or a vacation.

The two-page layouts were heavy on product with limited journaling. The concept of a single-photo layout just wasn’t something I considered. If I had just one photo from an event or photo session, I would include it in a photo album but felt that the single photo wasn’t worthy of its own scrapbook page.

As my scrapping has evolved, I find myself scrapping single-photo pages more frequently with a greater emphasis on the story. For many of the stories I want to tell, I simply don’t have a lot of photos from which to choose.

In what situations do I choose to scrap a single-photo layout over a multi-photo one?

Let me elaborate as we take a look at some of my layouts using Simple Scrapper Premium Membership templates.

In It’s a Boy I tell the story of a milestone event – the birth of my eldest son. The photo shows my husband with our newborn just a few hours after his birth. The journaling, addressed to my son, tells him a story he wouldn’t otherwise know.

Why a single-photo layout? In this case, I don’t have a group of photos that would hang well together for a multi-photo layout, and this single photo is a standout amongst the photos I have from my son’s birth. 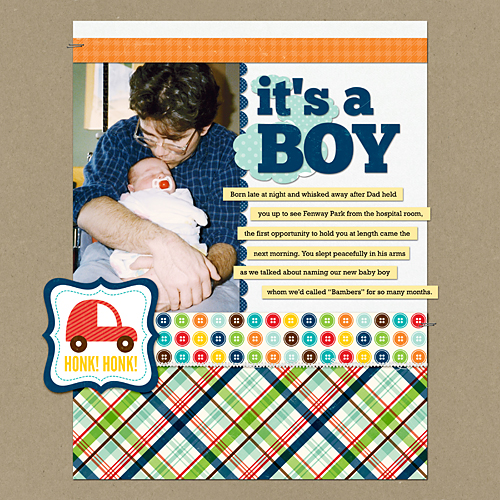 Scrap a Brief Period of Time

In Just Waiting I document a brief period of time. My husband took a photo of our youngest son and me waiting in the Frankfurt airport for our flight to Berlin. My journaling talks about my impatience in the long wait at the airport, which was simply a temporary destination.

Why a single-photo layout? The photo isn’t strong enough to represent the bigger event, our trip in Berlin; at the same time, I found it interesting enough to tell a small story. The photo sums up my personality and our son’s so aptly. This is a story I wouldn’t have otherwise told if not for a single-photo template. 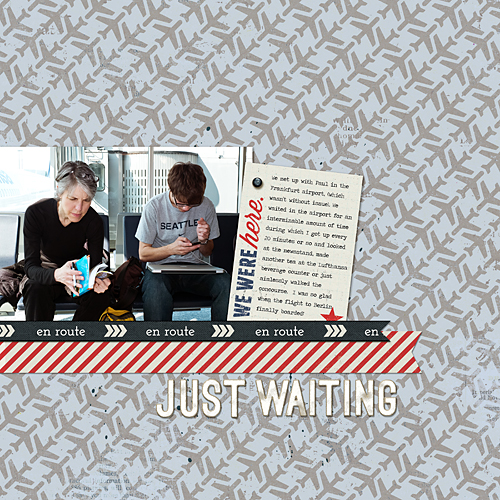 Similarly, the layout Hello Sunshine documents a short time period when my eldest son rode his cousins’ cruising bike on a Florida beach.

Why a single-photo layout? Like the previous layout, this photo wasn’t strong enough to support a story about our entire trip to Florida, but instead captured a rare occurrence for my son since we don’t live near any beaches. 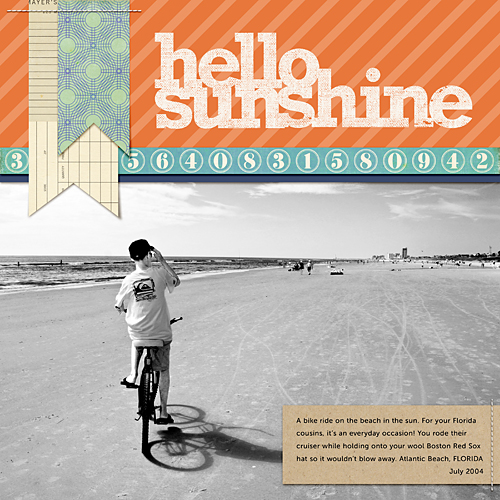 The single-photo layout can be used to tell about a specific period of time. In Remember I document my eldest son’s toddler years with a photo that characterizes his look and his activities succinctly.

Why a single-photo layout? Although this photo is not an artistic stand-out, I don’t have other photos from that same day or same period that would have worked well in a multi-photo layout. In fact, the everyday quality of this photo is its strength, not a weakness, for the story I want to tell. 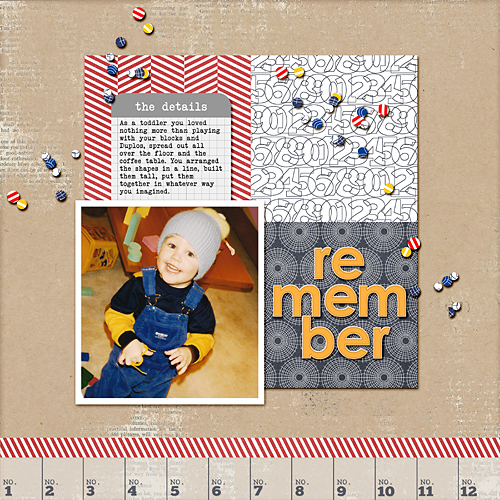 In Ski Trip Memories I chose a photo of me and my father during one of the only ski vacations we took. I use the photo as a springboard to talk about the fact that my father took up skiing after he turned fifty. At the same time, I document a period of time, the 1970s, and the years I skied with my father. The photo’s details, such as our orange ski jackets, and the older model cars and the ski slopes in the background support the journaling.

Why a single-photo layout? The photo was taken in the “pre-digital” days. My parents were frugal with our photo taking; I was often reminded about the cost of film and the cost of the processing. 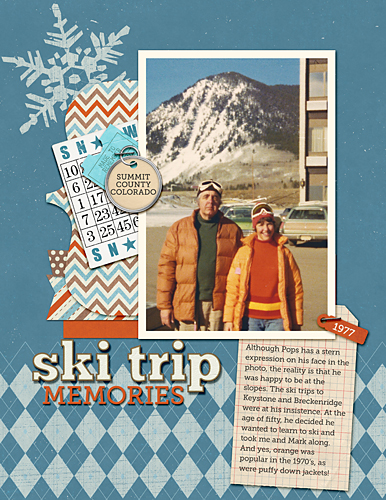 Scrap a Person or Group of People

The single-photo layout can be used to document feelings about a person or group of people, such as a family. In The Three of You I write about my husband and our two sons. I don’t have a lot of photos of the three of them together.

Why a single-photo layout? A multi-photo layout with two or three photos of the three of them wouldn’t have been stronger than this single-photo layout for the story I wanted to tell. I’ve used this same photo in a layout about the trip we took where the journaling emphasis is on the place. Although the journaling in this layout references the time when and location where the photo was taken, its emphasis is on my feelings about them. 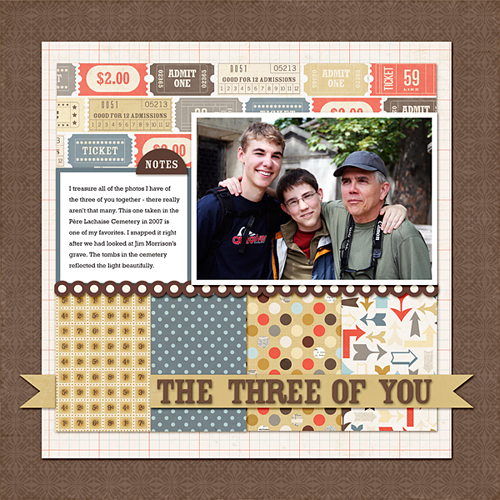 Finally, the single-photo layout can be used to document a place. In Dream Home I wrote about the first home my parents ever owned. While I can remember the home we lived in before this home, I think of this as my first childhood home.

Why a single-photo layout? For the same reasons I mentioned earlier about photos in the pre-digital years, there’s only one photo that captures me and my brother on the swings my father made for us. The two of us spent many happy hours in the backyard of this house. 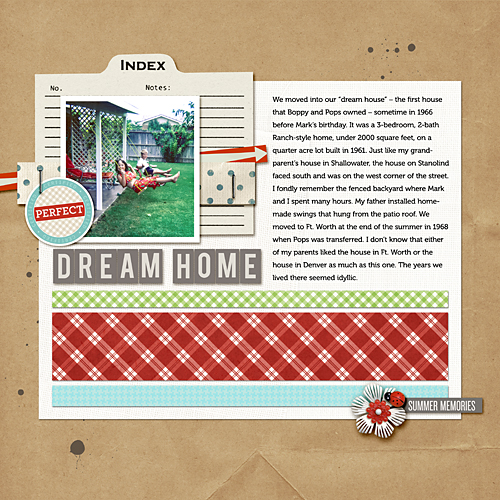 Join the conversation about single-photo scrapbooking by leaving a comment on this post. Like Jean, have you ever felt guilt about creating single-photo pages, like it was wrong? How many photos do you usually use on a page? Has that changed over time? How often do you scrapbook with just one photo?