My digital record begins in high school; my daughter’s, at birth. The children of today will have no photos from their past to scan and share online. For the first time ever, entire lives are being recorded in digital format and in real time. But with this evolution, the value of a single photo has shifted.

When my friend Wendy Smedley asked if I would contribute a blog post about Project Shoebox, I was happy to share my perspective. The concept is simple: scan a photo, share it, collect stories and enjoy the satisfaction. However, implementation of this charge proved more challenging.

I have no shoeboxes of photos to scan.

I purchased my first camera in high school with money earned from tutoring students in math. Every time I would have film developed, I would check the box to get a 3.5″ floppy disk included with my prints. My oldest photo (below), from 1997, is 269×417 pixels and 33KB. 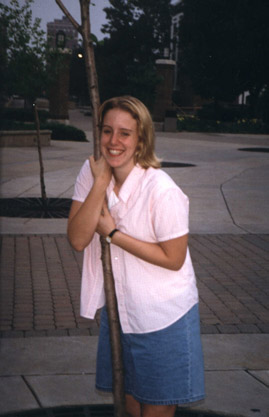 This is likely the first photo ever taken of me by someone other than a relative. It was a boy who took it, and I kissed him.

Surprisingly, that is not the part that strikes me most today. Rather, it is the fact that I lived 900 miles away from this spot at the time of the photo. Today, I live just 90.

When a child is at home, her story is intertwined with that of her parents – it’s the family story. With this photo and my first adventure into the world, my story really began.

Once I had a camera in my hand, I was hooked. The only shoebox I’ve ever had was filled with 3.5″ floppy disks, ZIP disks and CDs. Now, those stories of yesterday live on Flickr in 33KB chapters; and the stories of today, in 10MB ones.

Today’s shoeboxes are digital, but our relationship with them feels familiar. We stuff photos here and there, in this folder and that. We leave some in a box on our desktop, only to discover them months (or years) later.

I recently saw a forum post about a woman who deletes her digital photos after printing them, so she doesn’t run out of hard drive space. Near outrage ensued as the woman was chastised for placing so little value on her photos.

While I don’t recommend this woman’s approach, are we really honoring our images by doing what is more common – keeping every last one and cramming them into 2 TB digital shoeboxes? As Wendy describes in her introduction segment, the point of Project Shoebox is not to scan every last photo. The point is to just do something; to find balance and rekindle the value of a single photo.

Last month I posted on Facebook that I took just 2500 photos in 2012, with two thirds of those coming from my phone. My comrades in scrapbooking were shocked, especially since I have a baby. One even commented that she takes that many photos each month.

I deliberately take fewer photos, spend more time in the moment and delete as many as half of my images, saving only the best. While I may not have had any shoeboxes, my grandparents did. Hundreds of photos now sit in boxes at my childhood home, with few names and dates to give them context. Most not even my father can recall.

I can’t change the past, but I can guide the future. Though my daughter’s digital record began at birth, the legacy of this part of her story is up to me. I choose to reclaim the value in our photos by filling our shoeboxes with curated images and the stories that matter most. She deserves nothing less.