This is a guest post from team member Kelly Sroka.

Being left-brained was certainly a plus when I was in high school. I could easily digest information and recite it for a test. I understood how to take notes and organize them into a coherent essay. I even enjoyed diagramming sentences (yes, I am that nerdy!). However, when I got out into the real world, I was encouraged to “Think Outside the Box.” What did that mean—outside the box? I liked being in the box. The box was comfortable, safe, and perfectly square—I understood the box. Why did I have to go outside the box?

Over time, I came to realize why being outside the box might not be such a bad thing. Inside the box were straight lines, brown walls, and right angles—and I loved all of those aspects of the box. Outside the box, however, the lines were squiggly, there were colors everywhere, and angles could be acute or obtuse, depending on your mood. What a new world! But could I actually enjoy this place?

When I began scrapbooking, I relied entirely on my left-brained tendencies to complete a page. I began with that perfectly square 12×12 paper, added an even number of photos (no odd numbers here!), and put everything smack dab in the middle of the page. Everything was right inside the box—just as it should be. 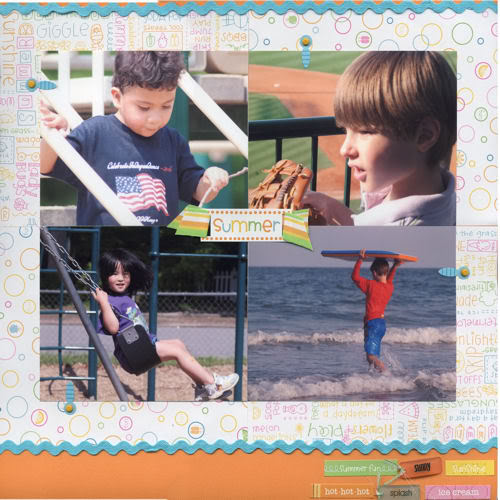 One of my earlier pages. See? Everything right inside that box—12×12 paper, even number of photos centered on the page.

Then I began reading scrapbooking magazines. Almost every layout I saw had to have been made outside that box. There were paint splatters, torn strips of patterned paper, and ink on everything. I felt just like that square peg trying to squirm its way into the round hole. I could not figure out how to be so . . . creative. And, if I am totally honest, there were a few times that I almost gave up on scrapbooking altogether. How could this left-brainer fit into a seemingly rightbrained craft? 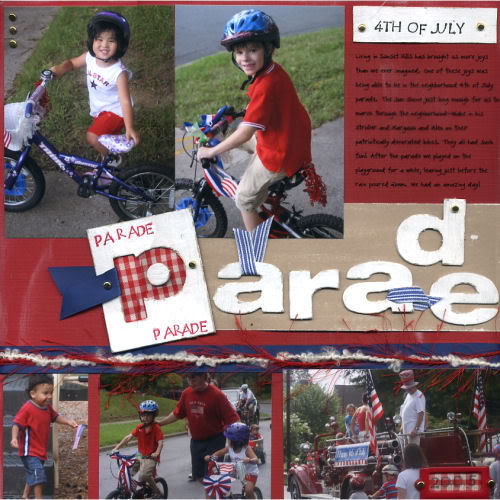 One of my first forays outside the box—I painted the chipboard letters, stamped in several places, and used and odd number of photos. This layout was particularly difficult for me at the time because I felt so unsure of what I was doing.

Eventually I began finding resources that appealed to me as a left-brainer such as Becky Higgins’ sketches and Stacy Julian’s Simple Scrapbooks magazine. Whew! Maybe I could keep at least one leg in the box and still create beautiful pages. At this point, I finally began to feel validated as a left-brained scrapper. 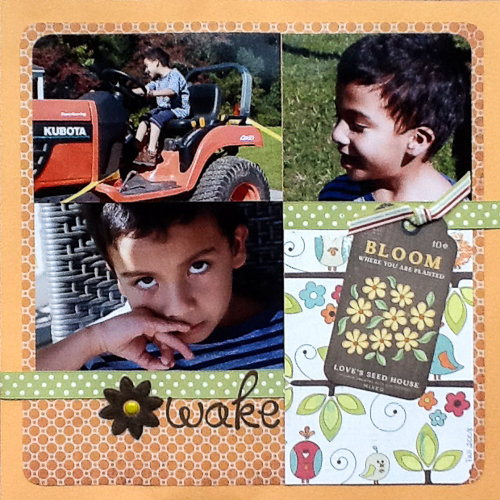 Thank you Simple Scrapbooks magazine! I created this layout from a Simple sketch. The grid design appealed to my left-brain while the rounded corners, mix of patterned paper, and tag that spans multiple blocks led me into right-brain territory.

After I realized there were resources out there for us left-brainers, I happily sought them out. I began studying design principles to make my pages more visually appealing. I took classes to help me leverage my organizational skills into an improved work flow. I honed my photography skills. I found Simple Scrapper! I fell in love with the sketch templates on the site. Each sketch is so clean and well designed and open to interpretation, appealing to both left-brained and right brained scrappers. 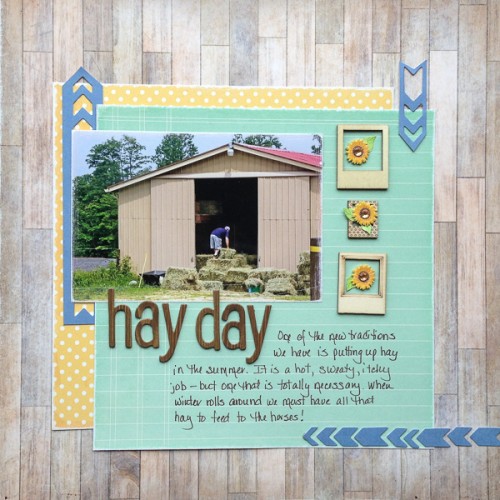 This layout is based on a sketch template from Simple Scrapper. The clean design of the sketch makes my left-brain happy and allows me to play in right-brain territory.

Along the way, however, I began yearning to step outside that box just a little. Maybe I could try using patterned paper as a background instead of cardstock (yipes!). Or maybe I could create a title using two different kinds of letter stickers (eek!). Or just maybe I could paint on my page (ack!). Recently I have looked to scrappers like May Flaum and Shimelle Lain to give me that right-brained inspiration. Just a little at a time, mind you, but enough to help me get at least one foot outside that box. 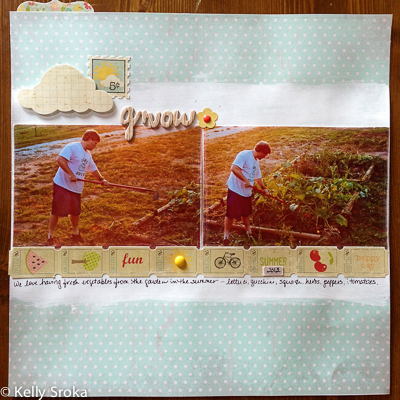 What’s this? Paint? Patterned paper background? Pop dots? Journaling on top of the paint? I proved to myself with this layout that I could indeed step out of my box. The overall design of the page is still me—very left-brained—but I’m beginning to incorporate more right-brained techniques.

Slowly I am learning to be a more whole-brain scrapper. I still rely heavily on my left-brain to get my pages started. I still use 12×12 paper, but it is now more colorful than before. I still prefer using even numbers of photos, but I’m now realizing the value of a visual triangle. I still tend to keep my pages clean and simple, but I am finding myself reaching for glitter, paint, or mist more and more often. These days I am having more fun scrapbooking than ever before. And going outside that box is not quite so frightening anymore. 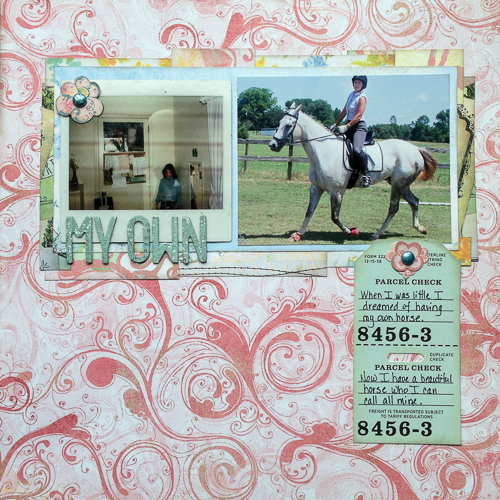 This last layout is a great example of how I have learned to become a more wholebrained scrapper. The design is still simple and straightforward. The photos have lots of blues and whites and greys and are balanced by the large area of pink patterned paper at the bottom. The blue in the right-hand photo forms a visual triangle with the blue in the letter stickers and the journaling tag. The pink flowers pop against the blue and grey in the photo and tag and echo the pink in the background. However, I’ve also used a bright swirly patterned paper, glittered letters and brads, and layering to make this page more interesting.