Back in November I shared my plan for scrapbooking the holiday season very simply. It all boils down to this:

I am excited to finally share portions of the completed album as well as a few reflections on the process. 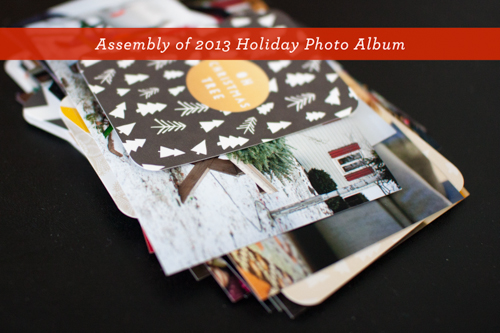 To begin the assembly process, I edited and printed 42 December photos. The album holds 80, but I knew I only had around 50 of the decorative cards.

Just for context, I began with around 500 photos in my library and deleted roughly half. Two-thirds of those were edited, many in batch, and then I gave my favorites three stars. There happened to be 42.

Along the way, I went ahead and marked a few additional non-holiday December photos for layouts and pocket pages.

I spread out the photos on my card table, in pairs and in chronological order. Then I took the deck of decorative cards and began matching them to photos. 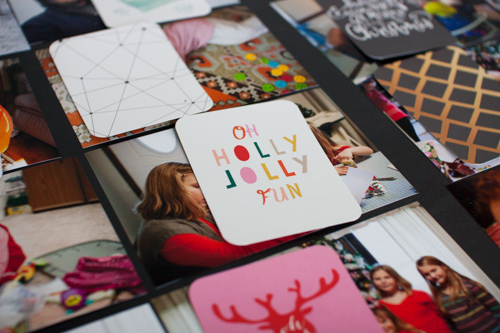 I started with the sentiments, matching related photos to the words. Then I filled in the gaps with purely decorative cards. I also tried to only have one sentiment per page. 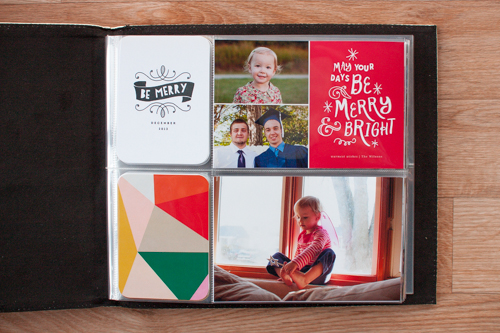 After the entire album structure was designed, I started inserting the cards and photos into the album. I began with our Christmas card, which I reprinted on my own printer. (More on that below.) 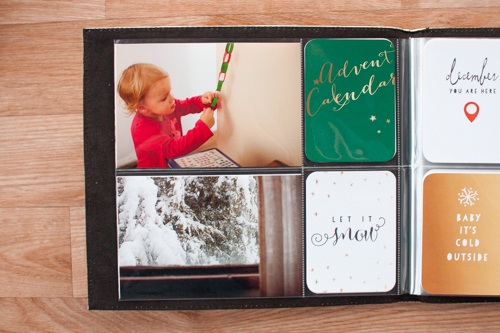 I had originally used our rounded-corner Christmas card on the first page. But when I inserted the photo of my daughter and the advent chain, I realized the square corners were showing. This initiated the age-old mental discussion – to round or not to round?

So I re-printed the Christmas card with square corners and was really happy with the result. 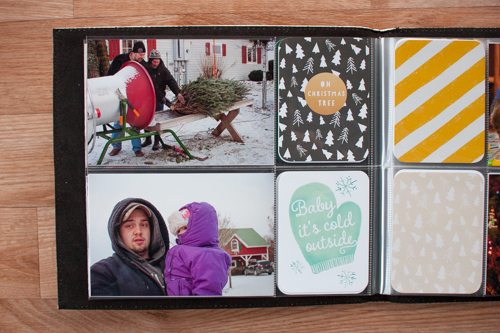 Moving on, I continued to insert the photos and cards into the pockets. I loved how quickly it all came together. I think it was only 10-15 minutes to fill the album. 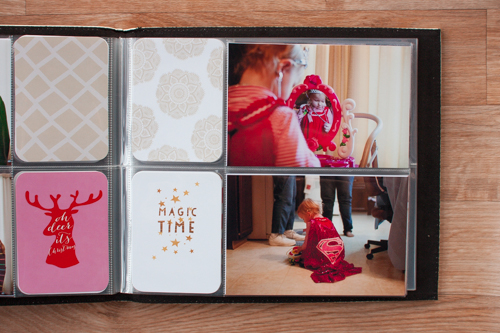 The bulk of time on this project was spent on editing the photos. I tried hard not to be a perfectionist about each photo, because there were so many to work on. 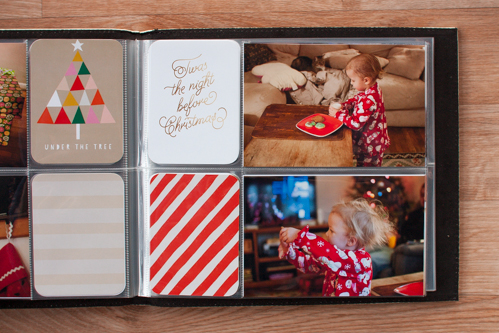 My favorite part of the assembly was finding natural photo pairs. I loved the two images of my daughter with the milk and cookies for Santa. She was so surprised that Santa ate the cookies.

It feels awesome to have this album done before the end of January, plus all of my December photos are now ready to share with family and friends on Flickr.

I love how this album turned out and how easy it was to prepare. This is truly the most simple way to scrapbook. I can see this approach working well for important birthdays too.

As much as I like it, there are two key challenges I experienced:

1. By taking photos first with a plan to scrapbook later, I found we didn’t do as much during December. It felt genuinely harder to get into the spirit of the season without a project to work on.

2. As a scrapbooker, I often think in sound-bites for journaling. Throughout the month I experienced “ooh, I have to write that down”, but didn’t have a clear home for those thoughts.

If I were to use the same format again, I would work on my album every few days and use regular journaling cards instead of decorative cards. This would allow me to spend more time with my photos and ensure that I have a home for my words as well.

Finishing this project already has me excited for next December, but I’m going to channel that energy into other pocket album projects!

What might you do differently the next time you scrapbook the holiday season?