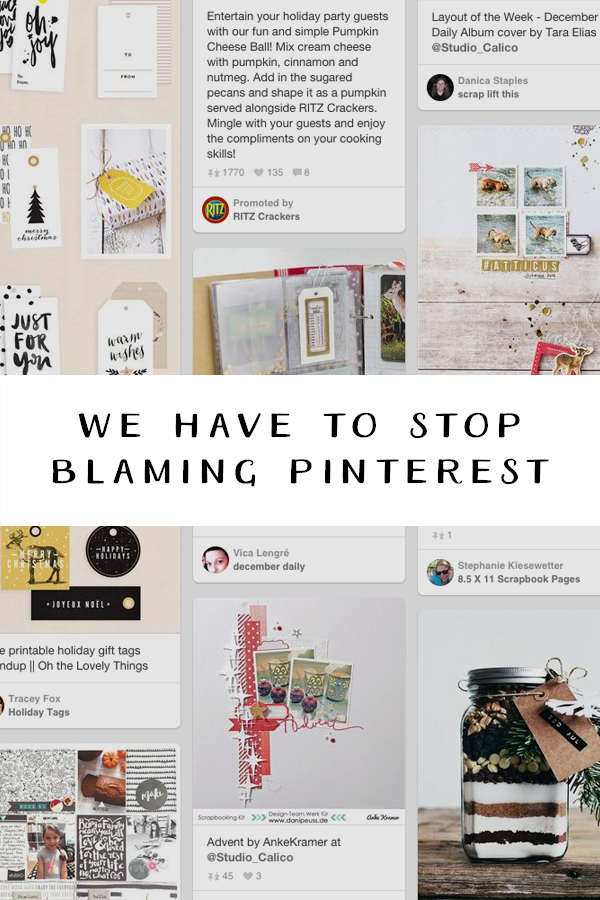 Over the past few years, I’ve witnessed dramatic shifts in how people interact with information (and each other) online. The time one used to spend on a single forum reply can now be used to pin ten different projects you might want to possibly try, someday.

This isn’t a new observation, of course:

“As we spend more time on Facebook, Instagram and Pinterest in lieu of these older platforms, voraciously consuming information and using a button-clicked as a surrogate for a reply, I believe we’re slowly disconnecting ourselves from the creative community.”

via The Easiest Way to Stay Really Motivated to Scrapbook

However, I believe the dialogue about this new dynamic (one that I’ve contributed to myself) needs to change. Instead of blaming Pinterest for our lack of focus, creativity, and productivity, what if we really tried to understand why those quick clicks are so attractive—and how we can work with the instinct instead of against it?

Activity on Pinterest surges in the late evening hours for a reason: we’re often running on empty by the end of the day. It’s pretty much the TV of the Internet. But like the boob tube, it can provide an outlet for a much-needed exhalation.

Sometimes you’re so wrapped up in the stress of the day that you can’t even fathom feeling settled enough to do anything (let alone create). That’s normal. So you turn to Pinterest, hoping it will get you inspired.

I don’t know about you, but the TV pretty much inspires me to fall asleep. It’s thus not surprising that Pinterest doesn’t usually inspire much scrapbooking. Worse, it can even foster additional guilt about time not well spent.

However, if we accepted Pinterest’s promise as a tool for aspirational vegging out, we might fare better.

The Solution: Pinning with Purpose

Instead of turning to Pinterest for on-the-fly inspiration, we should be using it as a repository for ideas we can grab when needed—later. By separating pinning from the creative process, you can finally embrace enjoyment of the platform without worry that you’re wasting time.

Pin now when your brain can’t do much else. Use those ideas later when you’re full of energy and must make something now.

So how do you get to this peaceful place in pinning? Planning.

Now I don’t mean crazy Gantt charts across your walls with project milestones and deliverables. Instead the planning I’m referring to looks a lot simpler and more fun. Here’s how to begin:

1. Think about the formats in scrapbooking that you use often.
Most of us have comfortable grooves of creativity, formats we turn to again and again because they work for us. However if you don’t actually ever make cards, then why are you pinning ideas for them?

2. Consider when or why you often seek out more inspiration.
Even though two-page layouts are your bread and butter, you may have sticky spots (arranging many photos) or frequently rely on resources to guide your efforts (sketches). You should be pinning resources for these points of need.

3. Create boards to curate ideas for each of those points of need.
Knowing what you should pin is only half the solution. Your finished system includes specific homes for the ideas you rely on, so you know exactly where to look during the creative process.

When you set yourself up in this manner, with clear purposes for your pinning and a well-curated set of boards, your “veg out” time can be used without guilt and your creative time will be accompanied by a stockpile of ideas you’ll actually use.

Are you ready to stop blaming Pinterest? I’d love for you to join me on December 8th for a free workshop that will help you escape distraction and procrastination with creative priority-setting and practical planning. Register now.
← PREVIOUS POST NEXT POST →