This is a guest post from team member Ronnie Crowley.

November 11th marks the 8th anniversary of the sudden death of my mother of a complication of her cancer treatment. I still can’t believe that its been 8 years since she died and all those things she missed out on in the life of her grandchildren. Even now I want to call her and brag about them to her. I mean who else but your mother can you brag about your kids to.

Two years after my Mum passed away my Dad suffered a huge stroke which stole him away from us. Although he survived for a further five years he was unable to care for himself and barely communicate successfully.

I’m not telling you this to make you sorry for me. There are plenty of people out there who have suffered way worse from me but I for one didn’t expect to be 45 and not have any surviving parent. I’m telling you to give a starting point to my discussion about scrapbooking the hard stuff. It’s only really been this last 12 months that I’ve put on my big girl panties and actually scrapped anything about it.

I didn’t even really start with the hard hard stuff. I started with a layout about my Aunt who died in a car crash just a few short months after my father’s funeral – which was the last time I had seen her. 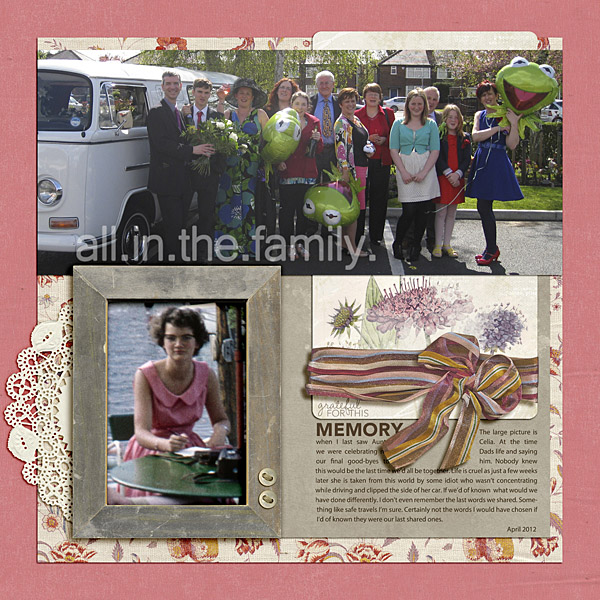 Doing this layout made me realize I needed to do some layouts about my parents for my kids. If I left it too much longer some of the details would be lost forever.

Even though my Dad had only died a few months previously I found it easier to scrap about him first. 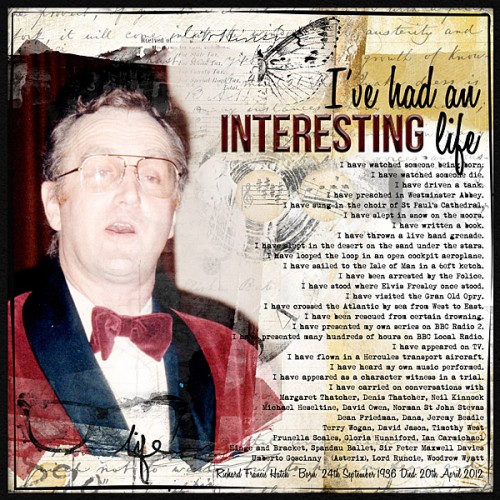 For this one I didn’t even after do the journaling as my sister had found a document he had written himself.

The big story I wanted to get down though was the regret I had about my mother’s death. I wanted this in my albums so that if something similar happened to my kids they could know they weren’t alone in having regrets. I think we often don’t share the bad stuff and allow our scrapbooks to become rose-tinted views on our life. I mean how many times in a scrapbooking gallery do we see layouts about unhappiness?

If you read my Facebook post you would think both my kids never did a thing wrong, are honor roll students, and star athletes. I also have the perfect marriage where there is never a bad word said or thought between us. Well it really isn’t like that and although I do live a very blessed life I do have seriously bad “mother” moments and I’m not the perfect wife – I’m a work in progress. I want my kids especially my daughter to know this. Everyone deals with hard stuff in life. 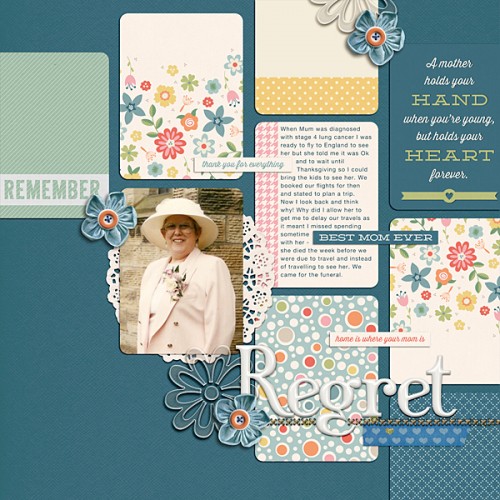 So my regret layout tells it and how even 8 years on I still regret that decision. I know there is another regret layout to be done about how I didn’t get to speak to my Mum the day she died. I missed talking to her before she went in for her chemo (with the time difference I would usually speak to her after) and then when things went wrong I called the hospital in England and the nurse who answered wouldn’t take the phone to her.

It seems strange now but my Dad didn’t have a cell phone and so I allowed this stroppy nurse to tell me No. I didn’t get to say that one last I love you as a few hours later she was cruelly taken from us. I admit now that this will be a hard page to create its hard even now to think about doing it but I know its a story that I need to tell.

I’ve started telling more of this story using a class available at Get it Scrapped by Debbie Hodge – Story Coach #4 – Time to Go. The Story Coach series of classes are a really great way of getting stories written. Debbie takes you through a series of steps to develop the stories you want to tell from getting the raw details down to the finished product.

The Time to Go class would be perfect for scrapping other hard stuff like decision to end a marriage, saying goodbye to a pet and many other things. While its doesn’t totally fit the story I’m writing it helps to follow a structure when your dealing with a hard topic. Debbie takes you step by through the development of the story and then finally the putting of the layout together.

Plus, you can use the code tellitwell to take $5 off Story Coach #4 – Time to Go — and there is no expiration. This means you can try one and out see what you think. You can use the whole step-by-step process multiple times to get all your stories down – the good and the hard.

Note: When you shop at Get it Scrapped a small percentage of your purchase returns to Simple Scrapper.