I’ve been following along with Ali Edwards’ One Little Word project for several years now, but only half-heartedly. In fact, I’ve been known to forget my word and then not be totally sure I remembered the correct one. I know I had words in 2009-2011, but I don’t think I knew quite what to do with them.

I was still working full time as a scientist during those years and also trying to get pregnant (and subsequently, gestating). My focus was on the basics, not so much on personal or professional growth. I was happy but generally just making do. Much of my free time was spent on blogging here at Simple Scrapper.

In 2012 I followed the lead of Chris Brogan in choosing three words for my year: big, bold, and brave. For me these words worked together to help me push past fears and venture into uncharted waters. I leaned on these words a lot in 2012 and learned a lot from my mistakes as well as my successes.

In 2013 my word was enough. At some level I knew this word was a baby step for me, not a giant leap. It was about saying no more and accepting imperfection. I needed to test the waters of creating boundaries before I could really dive in and make real changes. I don’t think I’ve explored this one fully, but maybe that’s just as it should be.

There were many aspects of life in 2013 that just didn’t work. I was tired much of the time. (I am tired now.) I didn’t take care of myself very well. I worked too much and played too little. I forgot how to relax and be in this moment instead of the next one. I often felt like I was bumping against the walls of a tiny box. 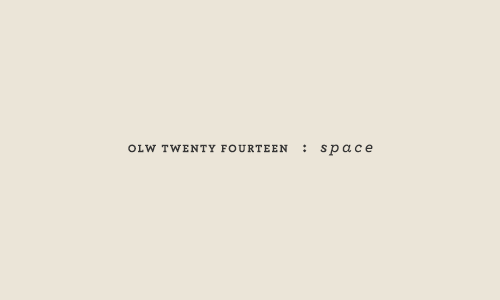 In 2014 I want to understand what it means to have more space in my life. I want to create more space and develop skills to maintain it. I want to feel light, airy, and open instead of dark, heavy, and closed. Though I don’t yet know what it looks like, I can imagine what a spacious life feels like.

How I’m Making My Word Visible

I believe that declaring your intentions is a powerful step towards making them real. In the past I never wrote about my words in public and I know this was a barrier to real progress. I thought keeping it to myself made it more sacred, but I was wrong.

This year I have signed up for Ali’s class and am already excited there is an active Facebook group. I’ll be sharing portions of my exercises here at Simple Scrapper along with additional personal insights on taking action on my word. I’ll also be exploring the idea of space further in each month’s membership magazine, as it pertains to creating space in life for scrapbooking.

Last year’s thematic core at Simple Scrapper was the idea of focus. I developed a 12-module course on the idea of focus in scrapbooking, but I felt like I was missing something. I realized that space is an important precursor for focus. Space is a foundation on which you can plan your year, build new routines and habits, and finish your big projects. Without space prepared, change can feel overwhelming and even impossible.

I’m excited to explore my word this year, both as it relates to me personally and to simplicity and focus in memory keeping.