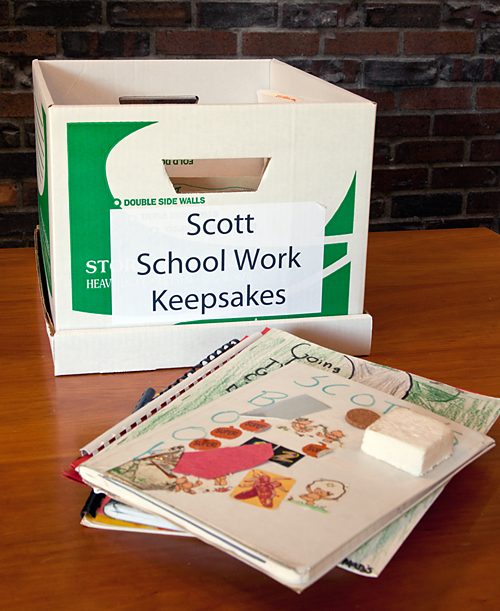 Recently a reader asked for some help on handling her unfinished projects and her sense of feeling overwhelmed. Many of the responses to the article echoed the reader’s issues – whether to finish projects for which supplies had been bought or to start projects that existed only on paper. Several readers had unfinished school year albums/projects on their list.

Like many of you, I have ideas floating around in my head and on paper for creative projects I’d like to start. In recent years, I’ve tried to mindfully adjust which projects I start so that I have a higher ratio of completed ones. I’ve also tried to seek solutions that were doable and realistic.

A couple of years ago, while I was in the beginning stages of practicing this mindful behavior, I was in the process of going through my oldest son’s school papers and doing something with them that would preserve his K-12th grade memories (he was a sophomore in college at this point!). Over the years, I’d stored the items in bankers boxes. For the most part, the items were chronologically stacked, but going through the boxes was not unlike an archaeological dig.

The first step was determine the goal(s) of this aspect of the project. In my case, the papers were scattered in several locations and unorganized. While most papers were in labeled boxes, there were other items stored with unrelated papers. Because I had been the one to keep the items, I knew which were from what grade, etc., something he wouldn’t be able to determine without my help. I wanted him to have easy access to the materials should he want to look at them. I also wanted to reduce the overall impact on our storage – we simply didn’t have the room to keep all of the work. To summarize:

Reduce the Stress of the Process

How to Decide What to Keep

I had to decide what I would keep from the boxes; the items included artwork, school reports, certificates, classroom lists, and report cards. 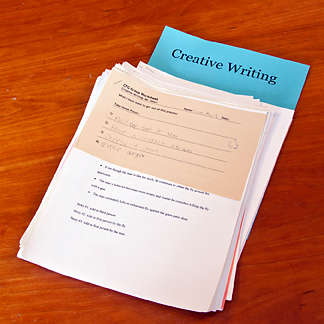 My oldest son is more sentimental than my younger son. I knew he’d want to hold on to a fair amount of the materials. Ideally I would have gone through the materials with him, on a regular basis and long before the time he reached college. Nevertheless, I felt I had a good handle on what he would want to keep.

At the end of the process,  I still had several bankers boxes’ worth of materials. In the next post I’ll share what I did with them. It’s a system that’s still working for me and my sons.

Until then, do you have a similar project – letters, school papers, other memorabilia – you have started, want to start or have finished?

Be sure to check out Part Two and Part Three of this series.